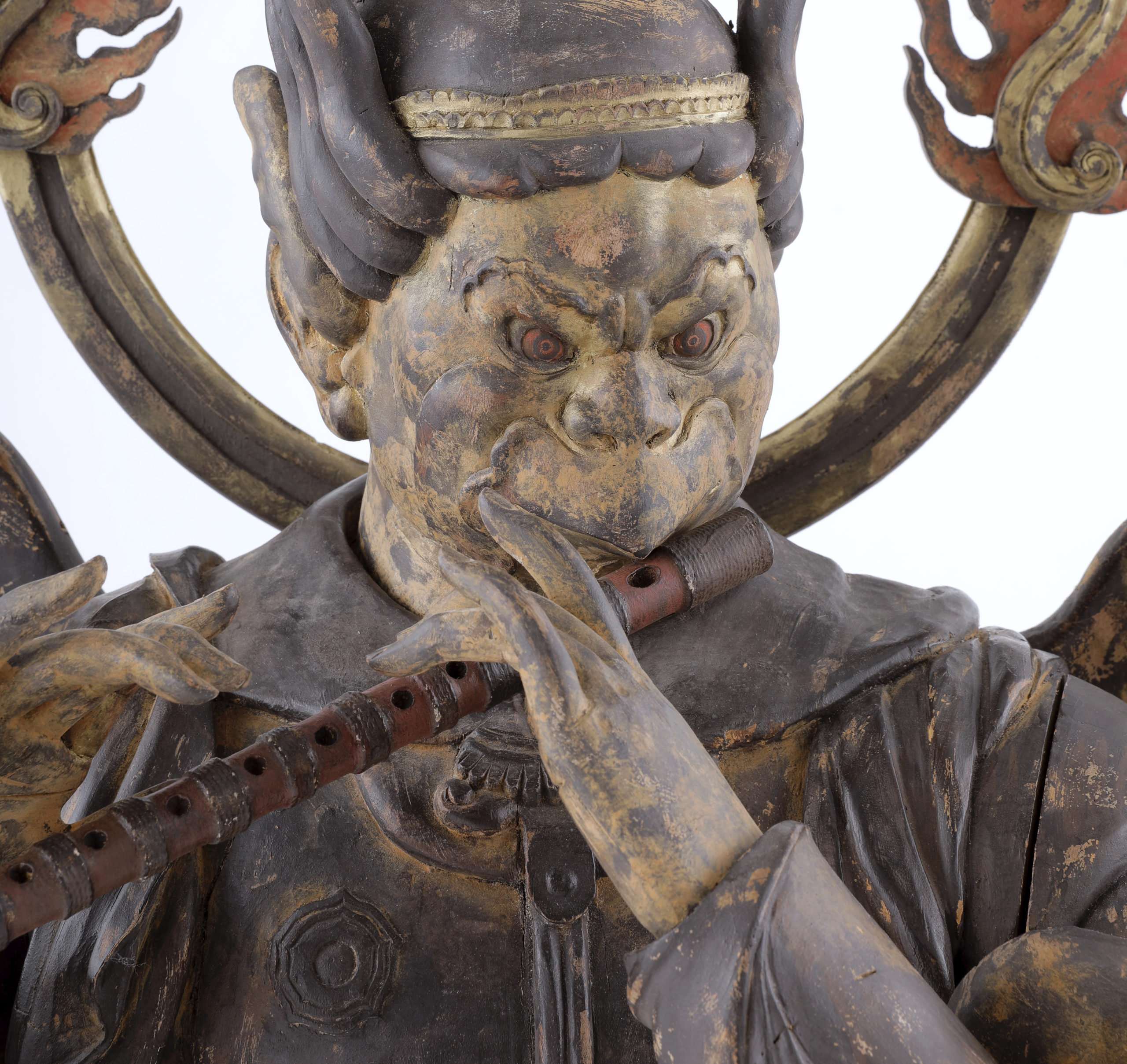 From December 2, 2022, Kaikai Kiki Gallery will hold a solo exhibition of Hideki Maekawa’s works entitled “KogaーAntique EleganceーDrawing on Heian- to Kamakura-era Sculptural Styles.” With wood sculptures as his main medium, Hideki Maekawa also makes paintings, household objects, and even stories. He began creating Buddhist statues through a dialogue with Takashi Murakami five years ago, and presented his first “Fugen Bosatsu (Samantabhadra Bodhisattva) Statue” at “HealingxHealing,” an exhibition curated by Murakami in March 2021.

In creating his Buddhist sculptures, Maekawa researched diverse styles of Buddhist statue making from various regions, taking special interest in the statue-making culture during the transition from the Heian period to the Kamakura shogunate. From the mid-Heian period onward, in the Tohoku region of Japan and elsewhere, the culture and styles of the capital mingled with the local natural characteristics, and production of Buddhist artifacts began to flourish. Maekawa describes the Buddhist statues he makes as “regional Buddha” created from a hybrid of courtly styles and sensibilities with indigenous culture. He explains that he creates his statues not with glittering elegance of the metropolitan sensibility of the time in mind, but rather imagining the stance of regional Buddhist statues created out of pure longing for the capital city. The word “koga,” which is the title of this exhibition, was also chosen because it expresses a different sense from the so-called “elegance (ga)”

This will be the artist’s first solo exhibition with Kaikai Kiki as well as the first to exclusively exhibit a series of his Buddhist statues. We sincerely look forward to welcoming your visit. 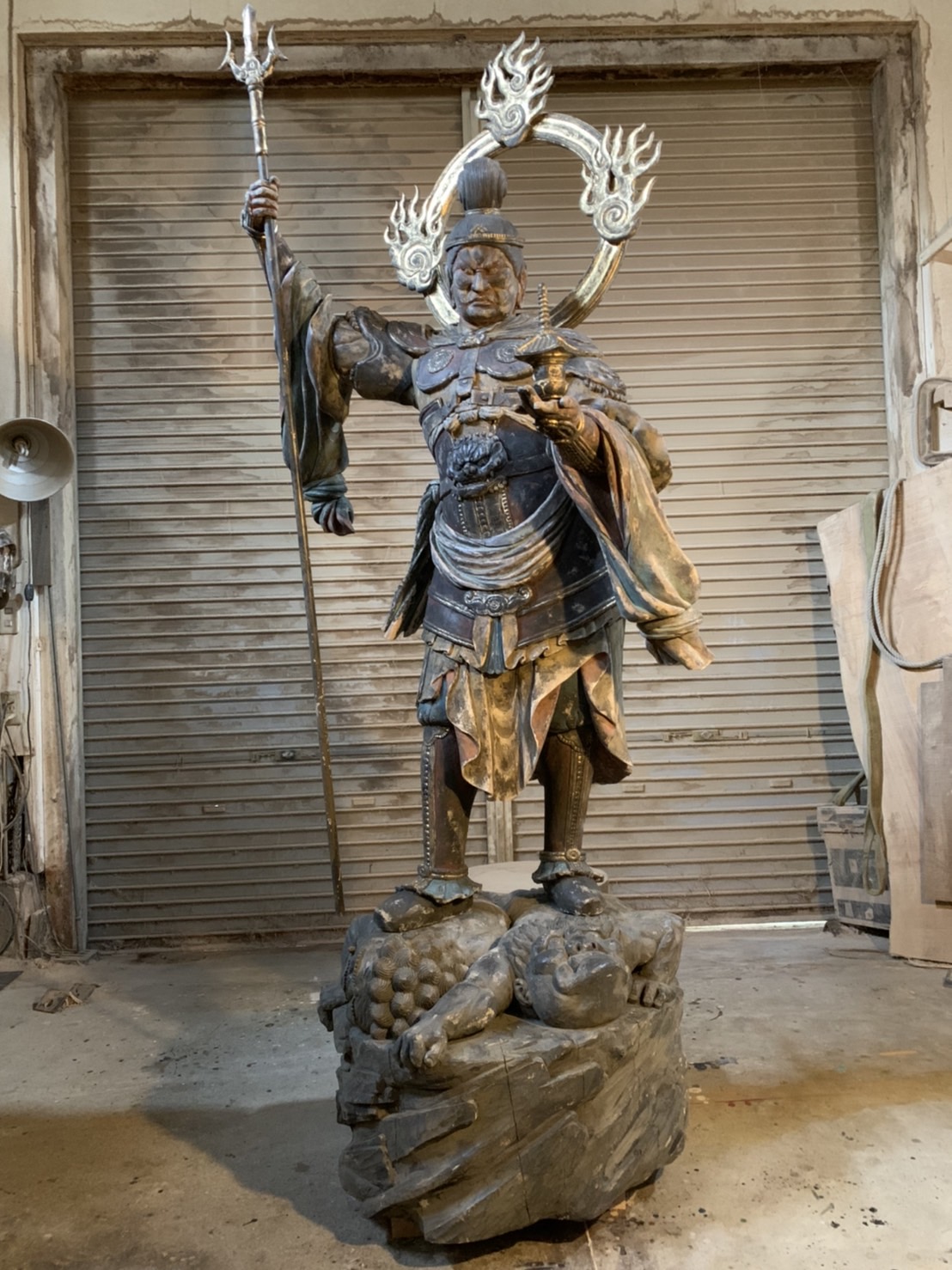 My first encounter with Hideki Maekawa was 15 – 16 years ago when I purchased his work that was a sort of homage to Joseph Cornell from “gallery feel art zero” in Nagoya.

I then began to see Maekawa’s work occasionally in lifestyle crafts stores, and gradually his name stuck with me. When I heard about his major show at a gallery called DEE’S HALL in Aoyama and went to visit, I was surprised to see that he had created many works of human figures that were based on the Japanese complex about the West, the Caucasian-based beauty, which was the crux of Japanese postwar art. I was very surprised to learn that 80% of the works at the exhibition were sold out by midday on the first day of the show, as it is very rare for sculptures to sell in Japan.
I wanted to talk to him, so I offered him an exhibition at Hidari Zingaro in Nakano, which he readily accepted, but what he wanted to do with me was to answer the question: What is success in Western sculpture? I frankly told him that if a Japanese sculptor tried to create a Western sculpture, it would be off in some ways or too caricaturized; it would end up something similar to an image made by a Westerner of an Asian or Japanese in glasses with narrow eyes and buckteeth. He was very much convinced, and we parted our ways still wondering what the best direction for his show should be.

Soon after, when I saw a report on his Instagram page that he had made masks of ogres for a festival in Hiroshima, I thought this was a great idea and immediately contacted Maekawa. I suggested that he make Japanese gods, and he responded, “Let me think about it a little.” About half a year later, he completed a statue of Nyorai Buddha sitting on an elephant.
I expressed my very excited admiration to him, tipping my hat to Maekawa’s ability to actually create something based on a given idea and his ability to deepen his knowledge of a context in order to create his work. He was pleased with my reaction and told me that he wanted to make a dozen works, all large scale, preferably for a large venue, and of course, I agreed. This is the resulting exhibition I entrusted to him.

For example, I believe there is a considerable gap between sculptures made by a very traditionally trained Buddhist sculptor and those made by Maekawa. In other words, there may be smattering of mixed information that seem awkward or posing and finger positioning that lack coherence that those in the Buddhist world may view critically. However, I strongly think such mistranslations as necessary misinterpretations when it comes to the evolution of my own art, so I believe that I did not make a mistake in offering this exhibition to Maekawa, who dares to do just that.

One major problem is that I fear that the wood he is using may crack significantly in dry regions. Maekawa’s main sculptures are made of wood that were found fallen in the fields, rivers, and the sea, so there is still moisture in it and the distortion is so great that their forms shift even after completion. So, this time, we may think of these sculptures as the first prototypes, and give him an opportunity to refine them in other materials later on based on these original models.

In any case, we hope that visitors, including specialists, will enjoy the new world of Japanese deities that Maekawa has created over the past six years at this exhibition.

As for Maekawa, we plan to have him visit the venue several times during the exhibition to engage in dialogue with the audience, so please look forward to it. 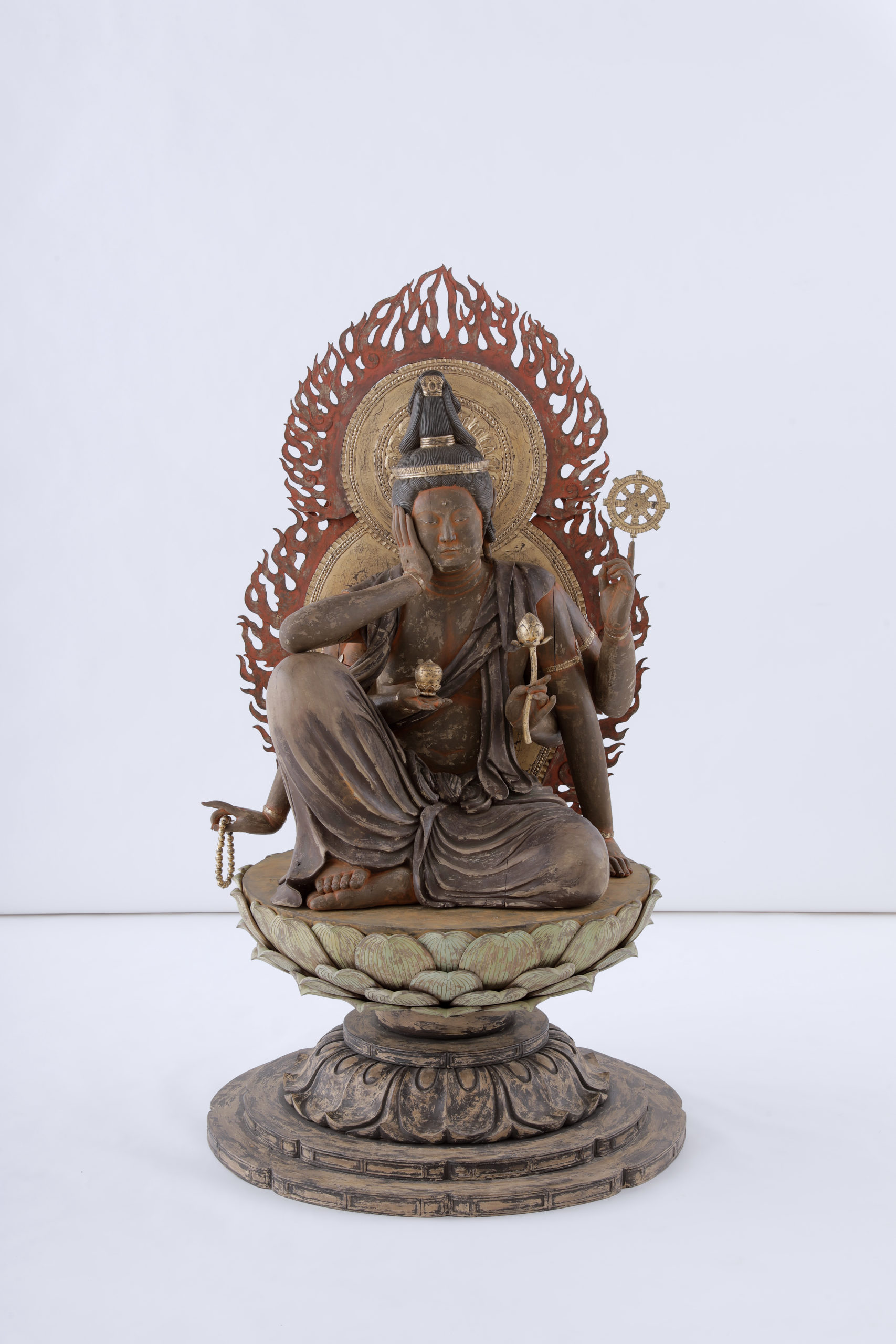 Message from the artist

I like the word “fūdo.” Fūdo refers to the natural environment and the lay of the land, human history and construction of culture that eventually establish the basis for everything until it ultimately reaches the nature of people born and raised there, but it is so commonplace that one is rarely aware of such a thing in one’s daily life.
Several years ago, after Takashi Murakami suggested the motif of a Buddha statue, I went around the country looking at old Buddhist statues that remained in various places. At first, I had my hands full trying to understand the techniques of wood carving and the various rules behind religious sculpture, but gradually I became intrigued by the background of their creation. Japanese Buddhist statues are foreign deities brought to the small island nation from foreign countries across the sea. The Japanese fūdo is what has accepted and nurtured them over time. As the momentum of art production spread from Nara and Kyoto to other provinces, Buddhist sculptures were repeatedly crossbred with old rain and soil that could not be wiped away in each region, and continued to evolve through reproduction and elimination, at last becoming an endemic species of Japan that differs from those on the continent.
Most of the Buddhist statues we can see today, which are between a thousand and several hundred years old, are not inscribed with the names of their creators. Perhaps because of this, even those of us living in the modern age can contemplate these “hare (special days and places of festivity) sculptures” created by the unknown, without feeling any sense of discord, as if we were just looking up at the magnificent autumn leaves.
Buddha images are always in the middle between the fūdo and the people who lived in that era. Museum exhibitions of old Buddhist statues are always crowded with people without exception. This may be because Japanese people consider such exhibitions as special occasions similar to “hare days,” but how would people from different cultures, that is, different fūdo, perceive the form and specialness of these objects? I am very curious.
In the hope that these sculptures will continue to function as a link between Japan and the rest of the world, I am pleased to present the twelve Buddha statues, as well as the kind of masks used in traditional festivals.
I sincerely hope you will take the time to visit.